This is likely to be quite a long post as there’s plenty of news in the world of the One Eyed Man to catch up on. Soooo ... either give up now and simply come along to the next event – Tuesday 17th April, Tapestri Cafe, Swansea, 7.30pm, all tickets £3 on the door – or get yourself a coffee and a biscuit and strap in ...


Last month’s CHAT/SHOW was the best attended yet with over 20 people coming along to listen to me ramble on about conversation and then having some themselves. Now, 20 people may not seem like very many and you’d be right but in the context of this work it’s just about perfect. 20 people is a large enough group to allow everyone to feel safe and anonymous at the beginning of the evening but also small enough to allow them to feel that they can bond with, and get to know, the people with whom they’ve shared the experience. This work is not just about communication but about actually dropping barriers that we put up between ourselves and others. I know for myself that I tend to walk around the world wearing a protective forcefield that stops me from having to deal with the other people I come across in the world. And that’s fine ... but the negative impact of that is that over time I begin to fear and be suspicious of others for no other reason than that they are ‘other’ to me. And that can only lead to the world becoming a scarier and colder place. 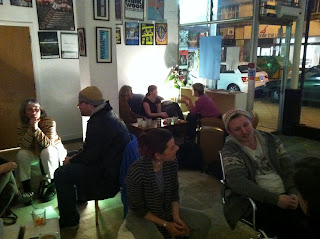 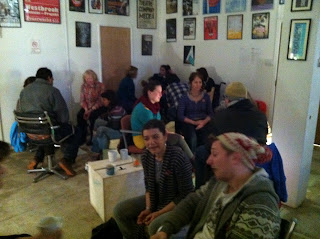 The purpose of the One Eyed Man Project – I now begin to realise – is not just about me finding a place to vent my spleen in the hope of meeting like minded curmudgeons. It’s actually about re-igniting the possibility of genuine connection and communication between people – and providing a space where people can let their guard down just enough to recognise that they are not alone.


Now ... I need to reassure you that, despite not having lived there for over 20 years, I am still a Yorkshireman. I’m dour, suspicious, cynical and I wear a flat cap. My bullshit detector has been beeping madly as I typed that last couple of paragraphs. But the fact of the matter is that I have learned throughout my life that the old maxims are there because they are true. To quote Paul Weller – what you give is what you get. When all I put out into the world was gloomy, cynical bitterness at my lot in life, that was all I received in return. When I decided to try and put some good energy out there – just for a change, for the hell of it – what do you know? I got good energy back in return. So, I couch all this in a blanket of dour northerness but all I can say is that I tried the other way and it really didn’t work for me ...
Back to CHAT/SHOW – the piece continues to evolve. As with all this work, I don’t prepare, script or rehearse. The basic reason behind this is because I want to have a conversation with my audiences and you cannot plan a conversation. I have one more scheduled monthly CHAT/SHOW in Swansea – 17th at Tapestri cafe – and then I will begin to change some of the emphasis on what I do. I’ll still hold CHAT/SHOWs but in future I plan to give people much more time to talk to each other. Currently, it’s ten minute slots with topics about conversation – two people talking and one observing. In future I plan to give at least half an hour to groups of three and the topics will be questions about life, the world and our place in it. I know it will be a big leap for people but I feel sure that it will really enrich the experience.


Thanks for reading this and do leave me any thoughts or comments either here or on Facebook: The One Eyed Man or Twitter: @manoneeye
Hopefully see you - specifically - soon.
Phil
PS - Brene Brown who has inspired so much of the work I do in The One Eyed Man gave another extraordinary TED talk last month. If you haven't caught up with her work yet, you must. Watch this and then go and watch all her other stuff. She's so incisive on vulnerability and shame and I absolutely adore her. Check it out.
Posted by manoneeye at 03:21